Akseki Ethnography Museum is located in Akseki, one of the largest nomadic settlements of Antalya , in one of the Akseki Button Houses , which stand out with their rare and different architectural character, which is in harmony with the traditional urban fabric of the district. More than 4,000 materials are exhibited in the collection of Akseki Ethnography Museum, one of Turkey ‘s largest ethnography museums.

It is possible to witness thousands of years of history of the region and our country, from old radios to wooden carved ceilings and doors, from weapons to agricultural tools, from kitchen utensils to musical instruments, in the museum, which is located in the middle of the buttoned houses, through which the Historical Silk Road passes. The museum has been brought into tourism with the initiatives of Akseki Municipality.

Akseki Ethnography Museum , located in Antalya’s Akseki district center, has one of the largest ethnography collections in Turkey. The museum, which was established with the donations of the people of Akseki, has been a pioneer in activating the high tourism potential of Akseki, which is located on the Historical Silk Road, with its buttoned houses and wooden mosques.

A unique example of the traditional housing pattern seen in İbradı and its surroundings, in the north of Antalya, especially in Akseki district center and its villages; The museum, which was built using wood and stone with a unique construction technique, without using mortar or cement, and located in a historical wooden mansion called ‘Button Houses’, was known as Elagöz Mansion until the restoration process.

Most of the works in the museum, which was restored by Akseki Municipality between 2011-2013 and transformed into Akseki Municipality Akseki Ethnography Museum in 2016, were brought together with donations from the people of Akseki. The museum, which aims to protect and promote the local, cultural and archaeological values ​​of the Akseki region, has been visited by 20 thousand domestic and foreign tourists in the first 1.5 years since its establishment.

Akseki Municipality Akseki Ethnography Museum was deemed worthy of an award in the Museum Encouragement competition organized by the Historical Cities Union in 2017. The stony place is entered through the double-winged wooden door on the ground floor of the mansion. Taşlık is the place where visitors take their first steps in the museum as the entrance, welcome and promotion section of the museum.

In the mezzanine basement of the mansion, a small room used as a warehouse and a shelter where young girls and valuables were kept during the bandit raids were used. The works in this room present the painful events in Akseki’s recent history and the use of the space with a theatrical expression. In this part of the museum, a symbolic way of displaying has been chosen to create awareness by empathizing with such events.

The first floor, which is the main living area of ​​the mansion, has a central plan scheme with a central sofa, cross-planned and corner rooms open to the middle sofa. While the ceiling, door and closet details in the rooms display the color of the wood; The octagonal ceiling in the middle hall was arranged as a blended application of modern and traditional, which was placed later during the restoration applications.

The works in the museum exhibition, which is located in the mansion built by Aksekili Hacı Hüseyin Efendi in 1840, reflect Akseki’s local lifestyle and artistic taste. Visitors to the Akseki Ethnography Museum witness the traces of experience in these works, which contain Akseki’s deep-rooted past.

In the museum, which accepts student groups from Antalya and its surroundings by appointment system, applied workshops on traditional handicrafts are also held. Activities such as marbling art, drama and puppet show are carried out by experts in the field.

The closest airport to Akseki is in Antalya. Turkish Airlines, Pegasus Airlines and SunExpress have direct flights from Istanbul, Ankara, Izmir, Adana, Mardin, Kayseri, Van, Samsun, Gaziantep, Trabzon and Diyarbakir to Antalya Airport, which is 142 km away from Akseki.

There is no direct public transport from Antalya Airport to Akseki. After going to the bus station by line 600 of the Antalya Metropolitan Municipality’s Antobüs company or by tram, you can go to the district with Akseki minibuses from the Bus Station. It takes about 3 hours from Antalya Bus Station to Akseki.

Apart from Antalya city center, there is only a direct bus service from Beyşehir district of Konya to Akseki. To reach Akseki from different cities, it is necessary to come to Antalya Bus Station and use Akseki minibuses from the bus station.

In order to reach İbradı from Antalya by car, it is necessary to proceed east until Manavgat and turn north at Kızılağaç Junction. Also known as the Konya-Manavgat Highway, this very winding and winding road splits into two as İbradı-Akseki after a while. Akseki is to the right of the fork, that is, on the east side.

Denizli, Dinar, Keçiborlu, Eğirdir, Yenişarbademli route are followed during the drive from İzmir to Akseki. Traveling by car from Istanbul to Akseki Bursa, Eskişehir, Bolvadin, Akşehir, Beyşehir; In the journey from Ankara to Akseki by car, the route of Polatlı, Ilgın, Beyşehir is followed.

Akseki is adjacent to another Yörük settlement of Antalya, İbradı . There is a 25 km distance between the two districts. In the region where magnificent views are witnessed, the Toros village Ormana , known for its Buttoned Houses , the eye-catching plateau of the village Eynif Plain , the ancient cities named Etenna (Background), Gotenna (Gödene) and Erymna (Ormana) bearing the traces of a rich historical past are among the places you can add to your route.

Akseki Municipality Akseki Ethnography Museum has succeeded in initiating the longed for tourism activity to promote the local culture, history and unique natural beauties of Akseki, one of Antalya’s least known settlements. The museum, where more than four thousand objects and ethnographic items are exhibited, should also be visited to witness the unique architecture of the region. 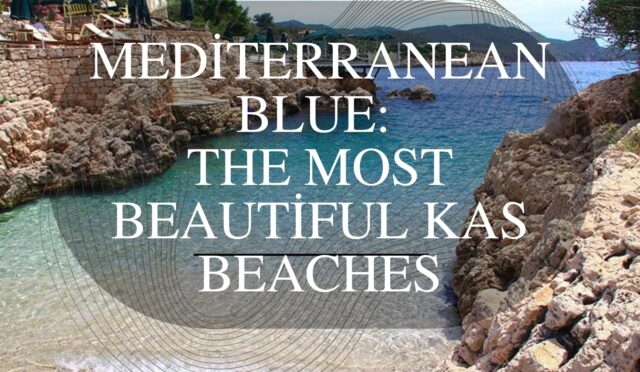 Kaş beaches are not beautiful, they are limited in number. Having the clearest waters of the Mediterranean, Kaş is…